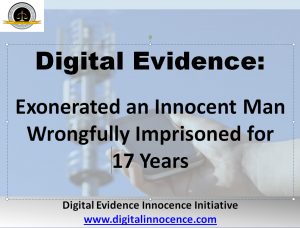 17 years later cell site records were used to set aside the conviction.  Those records were located in the basement of a retired police detective and had never been disclosed to the defense.

New evaluation of the cell phone call record established that, based on the location of the cell phone at the time of the calls, combined with which cell site towers they used, Vernon Horn could not have committed the robbery and homicide.  The new evaluation showed the first call was made from Bridgeport, CT while Vernon Horn was in New Haven, CT speaking with a police officer.  The cell site evidence also showed all five of the phone calls in question were made from Bridgeport.

Information and tools to aid Public Defenders in pre-trial or post-conviction cases can be found through The Digital Evidence Innocence Initiative http://bit.ly/2X2k5LD , as well as, the IRIS LLC Digital Evidence Case Assessment Method http://bit.ly/2JYiEqz, a tool to assist in the collection and organization of digital evidence.